Go to the text.

Stay tuned to MOBIS LIVE
and be up to date on what is going on across the organization.

Cuts down drowsiness after meals by 30% and on highways by 20% max. Also, reduces time taken to recover attention by three times.

Hyundai Mobis secures competitiveness with in-vehicle healthcare in advance by obtaining massive  amounts of evidential data and will expand into personalized technology by integrating deep learning with biosignals. 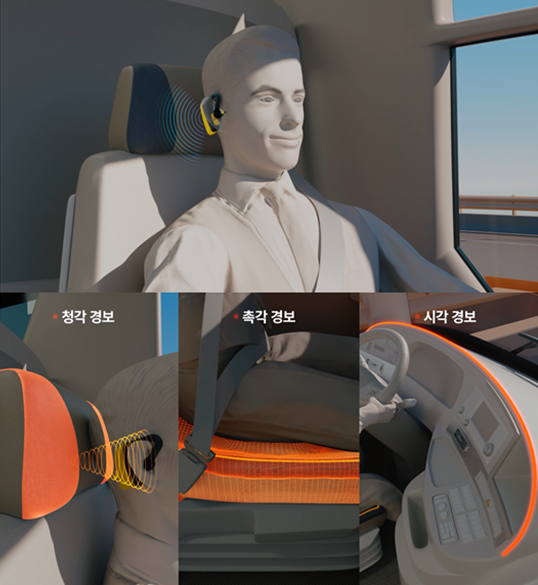 It was found that you can curtail dangerous situations like drowsy driving by up to 1/3 when applying driver monitoring technology based on brain waves. As more biosignal technologies are introduced to prevent car accidents, these technologies are expected to contribute to reducing the number of serious accidents involving buses or other commercial vehicles.

Hyundai Mobis, together with the Gyeonggi Research Institute, announced on March 18 the results of an analysis on the practical effects of “M.Brain,” which has been applied on Gyeonggi-do public buses as a pilot project for the past year. M.Brain is a driver monitoring system that uses brain waves and was first developed by Hyundai Mobis last year.

As a result of the pilot application, it was demonstrated that drivers who put on M.Brain showed higher concentration levels and were less exposed to the dangers of being inattentive. M.Brain is a technology that grasps the driver’s condition in real time by monitoring the brain waves around the ears through a pair of earsets the user wears. When a driver becomes inattentive, M.Brain uses visual, sound, and haptic s to help the driver recover his/her attention.

According to the results of the analysis on the pilot project, drivers who use M.Brain are able to cut down on their inattentiveness by up to 30% after meals, which is when drowsiness occurs the most. Inattentiveness leads to dangerous situations in which the driver falls asleep or cannot keep his/her eyes on the road ahead. M.Brain reduced inattentive driving by about 20% on highways where such driving could result in a huge crash.

It was also proven that M.Brain can help drivers to look ahead quickly even when they doze off or look elsewhere while driving. M.Brain detects inattentive driving in real time and s the driver through seat vibrations or warning sounds. It was also revealed that if you use M.Brain, your attention can be restored in 2.3 seconds maximum. This is approximately three times faster than 6.7 seconds in situations without using M.Brain. The technology is also forecast to be useful in responding to emergencies by securing a safe distance from the car traveling in front of you.

Above all, the feat accomplished in the M.Brain demonstration project is significant in that they obtained valid data on how brain waves vary depending on a driver’s health conditions and the driving environment in actual traffic conditions. The key competitiveness in such in-vehicle healthcare lies in the data acquired from driving on roads. To that end, Hyundai Mobis will expand the deployment of M.Brain to a total of 300 public buses by the end of year. Their plan is to increase the size of the demonstration and adopt deep learning to speed up the analysis process.

Global competitors in the in-vehicle healthcare sector are at a stage where they are releasing new autonomous technologies using biosignals that are relatively easier to measure, such as those from the pupil of the eye or a pulse. Hyundai Mobis, however, was the first in the world to develop a brain wave technology that is one step more sophisticated than simple biosignal technologies and to also collect large-scale data on this.

In parallel, Hyundai Mobis is developing digital healthcare technologies by integrating deep learning for interpreting brain waves with other biosignals. They will expand various joint projects including pilot projects with local governments and the transportation industry. This is anticipated to allow Hyundai Mobis to deliver tailored healthcare and infotainment services using the biosignals of passengers once they reach the fully autonomous driving phase based on purpose-built vehicles (PBVs).

You will be directed to the Hyundai Mobis after-sales service site. Do you want to continue?

No Go to the after-sales service site.
TOP